Chemotherapy is going well and I’m tolerating it better than expected. Some days suck, but nothing too dramatic. I’ve managed not to throw up over the two treatments I’ve had, though I certainly feel like it some days.

The entire process of receiving chemo is surreal. I have a port-a-cath (called port for short), a device that was surgically inserted into my lower neck and shoulder area that allows the nurses to put the IV line directly into it, thereby saving my already stressed veins from the continual new stress of chemo infusions. The port leads directly into my jugular. Those who know me well know that I am completely creeped out by anything, except diamonds and gold, touching my neck. It’s my theory that in another life, I died from some neck-based trauma. My kid constantly tortures me by blowing on my neck and I almost laid Stephen flat one recent day for coming up behind me with a feather and teasing my neck. So to know that I have a fixed device that I can see and sorta feel imbedded in my poor neck is just one other thing I’ve learned to Don’t Think About. That’s my core technique for surviving the day-to-day reality of being a cancer patient. It’s not denial. It’s avoidance. If I can mentally pick and choose what I will and won’t focus on, I get through the day much more calmly.

An infusion day for me is a day off from work. It has to be. I’m too dizzy to drive after the chemo. I go in early. They have a big room set up with comfy recliners and a large TV. I’m hooked up to the first of five drips, usually starting with fluids, moving on to steroids, and then comes the Good Stuff, the two chemo drugs.

The cocktail I am currently on is AC, which stands for the brand names Adriamycin and Cytoxan. These two drugs are very common in the treatment of early stage breast cancer. The Adriamycin is the creepy one. It’s toxic red, and administered in my port tube by hand, slowly injected, with the nurse carefully covered to prevent any direct contact between her skin and the drug. Some people have reported crying red tears after receiving Adriamycin. Not me. But my pee is a lovely shade of dark orange for a day. (Yep, you had to know that.) It takes about 3-4 hours to do this regimen and I have two more to go. After, it’s onto the Taxol, once a week for 12 weeks total. Then I’m done. 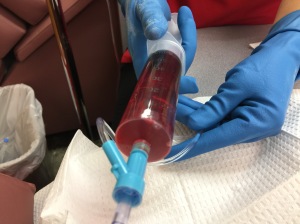 During my wait, I work on my laptop, sew my slow-growing hexie quilt, watch movies, chat with the other patients and staff, or just veg-out. I like down time and I’m never bored so this is doable. Then I go home and do absolutely nothing. The last treatment, on the day before Thanksgiving, left me nauseous right after, which was different from what I did the first time and what I was told to expect. But in the days after, the effects were very mild and manageable.

I don’t feel these drugs going into me, and the once the needle is in my port, I don’t feel that either. It’s always the idea of what’s being done to me that is disturbing, which is why I relegate the whole experience to the Don’t Think About pile, especially while I’m sitting there. Included on the big list of Don’t Think About are:

I hate how cancer has taken over my whole life, along with my kid’s and husband’s. It’s become my new full time job, on top of the two I already have and being a mom and wife. But I can’t fault the team of amazing doctors, nurses and others who help, nor my amazing friends and family who constantly check on me and love us up and down. This is what keeps me and mine going, the love and concern.

Last week I started losing my hair–fast. I knew it was coming. We waited for it, prepared for it by cutting my hair short. But on that first morning last week, when I ran my fingers through my tresses and saw strands coating my hand, I was frightened and upset. Tuesday I started wearing a scarf to work. Wednesday also. Thursday morning, on Thanksgiving, Stephen and Sam shared the Wahl electric buzzer and I stepped into the world of a Marine recruit. The two of them were adorable. Me, not so much. I look just like my younger brother, whom I love, but who I don’t want to look like. Sorry Pete.

My angst isn’t over my vanity, completely. It’s more about how not having hair makes me look sick. And in looking sick there are times I’m treated differently. Which is what I don’t want. I struggle mightily and mostly successfully (I believe) to be as normal as possible. I am capable of working. I want my brain cells to be engaged and stimulated. I want my family to not have too much of a drag on their lives by having to take care of me unnecessarily. This is essential to MY healing process and the absence of my hair sets that effort back many steps.

Yeah, there are wigs, and I actually bought a very nice one over the weekend, which I can’t figure out how to make look as good on me at home as it did in the store. We’ll leave that effort for this weekend. So instead I’ve got a small assortment of head scarves and that’s what I’m wearing right now. It’s not bad, and I take the time to make sure everything else looks good. But it’s not my hair, which I learned to love. 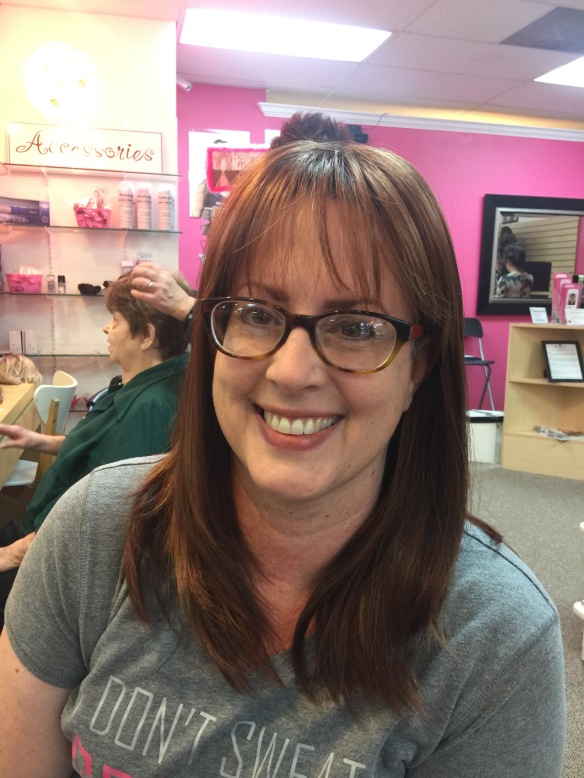 The wig at the store. Looked enough like my own hair to make me smile.

My hair was thick and coarse, and growing up in New York City, where the humidity is high and the wind is strong, I pretty much never had good looking hair. And more so as a teen when I was trying to control the stuff, but without the knowledge of products or good cuts to help. Every girl I knew had layered cuts, a la Farrah, but I couldn’t get my hair to roll that way. One time, when I was 14 and became inspired to have a way-cute short shag cut (this was the 80s), I instead ended up with Chia Pet Head for 10 months, until it grew out enough to put in a ponytail. Yep. Bad days those were.

Moving to the West Coast was the best thing to ever happen to my hair. Dry climate = manageable hair. Since, my hair has become my toy, something I’d play with during the day, my favorite accessory and my identity to a great extent. It took me four decades to figure out how to master my crop and now I don’t have it. I feel gipped and pissed. And I do worry that it won’t come back in, or will be much lighter. I’ve seen this happen to several friends, with this chemo, so this isn’t a baseless concern.

Before anyone dares to tell me all the things that I already know: it will most likely come back, it’s only temporary, it’s better than dying, etc…, let me just say that I speak my emotional truth here. Not my practical, logical, conciliatory truth. Being bald, for me, is the biggest personal emotional blow in all of this. Period. I don’t care how cute my husband and friends say I look. I don’t care that I “rock the bald” as Samantha says. I don’t care that I make pirates jealous. I care that cancer has taken one more thing from me and this one little thing is the very thing that makes me cry. So there.

I will get over myself on this topic. I’m already inching toward bald resolve. But, just for today, well, maybe this week, I’m allowing myself to wallow. A little.