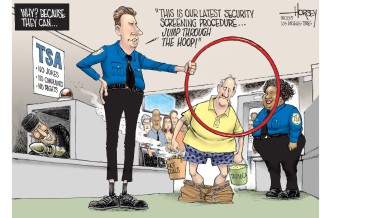 There are certain things that are not a good idea to do when other circumstances are present. These include Internet shopping when you’re drinking, calling an old boyfriend after a fight with your husband and now we can add blogging when you’re tired/depressed/feeling like crap. But I’m gonna venture into this arena anyway. And then we’ll see if I actually publish this.

I pride myself on being positive. My glass is more than half full, even when the measurements say otherwise. I’m happy, upbeat and raring to go forward, most days.

But something that happened earlier this month sapped me of my strength and, honestly, courage.

I went to Sacramento for several days for work. I had a conference to attend and I was really, really looking forward to the trip. I usually travel several times a year for varied reasons and I’ve been Simi Valley-bound ever since my August diagnosis. I like flying. I like airports and I love nice hotel rooms with room service.

Not knowing what to expect traveling as a cancer patient with a port in my neck and prosthetic boobs (gel-based) in my shirt, I called the ever-so-helpful people at TSA to prepare. My concern was that the prosthetics would not be allowed as gel-based shoe insoles are not, and I was not checking luggage, or willing to go without some shape. The operator said medical devices, including fake boobies, were allowed. (She didn’t use that term but should have.) But that I should tell them to do a pat down for me instead of going through the machines.

Some of you might have paid attention recently to all of the news stories about the expanded search parameters TSA was conducting. Well, it’s true. I spent more than 10 minutes–10 minutes– being inspected on the sidelines because I did what I was told and asked for a pat down. I was humiliated. Completely. The TSA agent was kind and saw my distress, but that didn’t stop her from performing her duties. My favorite was when she warned me that she would be feeling around my breasts and I told her I don’t have any breasts. Yep. She wasn’t expecting that answer. She did offer a private pat down, but that would have meant leaving my luggage and personal items beyond my sight and that I was not willing to do. So feel me up and down in public, because, hey, I look like one of the FBI’s Most Wanted, especially with my chemo beanie and fake boobs.

This performance was also repeated on my return home in Sacramento and I was just as humiliated there as well.

When you’re fighting a life-threatening disease, the most prominent emotion you have in front of the rest of the world is vulnerability. You are vulnerable to everything and everyone, from germs to treatments, well-meaning people, fear, physical discomfort and more. Many days I am one stupid moment away from a crying jag. It’s similar to being pregnant, without the gift of an infant at the end. I am just raw and I have to fight to be level and calm, which I believe I do very well, because functioning at pseudo-normal is a priority for me. The airport experience stripped me of all pretense of normal.

Topping the trip off was one of the side effects of the chemo treatments. My nose bleeds. All. The. Time. Not gushing. Just ladylike dabs all throughout the day. If I’m not bleeding, I’m certainly running because my poor nose’s membranes are very thin from the chemicals in my body. It sucks. Well drips, really. And it makes steady sleep nearly impossible. I take Sudafed (the real stuff), which does help, but I can’t take it non-stop or it stops working for me. So I drip, drain, snort, cough, blow and snore all through the night. Between the airplane and the travel stress, all of this got much worse, which meant I did not sleep. I have not been this tired since Samantha was a baby (the child did not sleep through the night for 18 months!). So, heap on some extra vulnerability, why don’t we?

I realize that until all of this is done, I don’t want to travel by plane, and I certainly don’t want to do it alone. I’ve taken for granted how much Stephen and Samantha shield me from my own fears. I am so lucky to have them, protecting me and keeping me safe, even if it’s just being safe from myself. They would have made a joke of the TSA search, or said something to make it better (if it didn’t land them in airport jail, which, with my husband, is a distinct likelihood). In this one area, I’ll allow myself to not push through courageously.

My body is definitely not the same as BC (before cancer). I am more tired, have less energy to finish my day. The traveling sucked every bit of energy from me for four days after coming home. I had my normal chemo on Monday, the day after I came back. Then work the rest of the week. Each night, I came home and fell asleep by 8 p.m.! And stayed asleep until 6 a.m. That’s unheard of for me, and the difference of life with cancer treatments. I was tired and achy and just generally feeling like nothing on or in my body was working correctly.

I just finished my tenth Taxol treatment. I have two more to go. Altogether, I’ve finished 14 chemos. My doctor reduced how much Taxol I’m getting by 20 percent for the last treatments because I’ve started to have numb toes and painful fingers. Remember that neuropathy is the big concern here. And then there is the weight gain, the gift that just keeps on giving. I’ve steadily added two pounds a week to my body since starting chemo, no matter how much or little I eat and exercise. I have never been this heavy in my life, even pregnant, and there’s not a thing I can do about it, yet. It’s the steroids. They pack on the weight, and yes it’s a lot of water, and will continue until I stop chemo. I barely fit into my clothes and I’m not willing to buy new ones for another couple month’s wear. So give me a wide berth, people.

I know I can do these last two treatments. We actually met with my oncologist today to talk about quitting early, because the neuropathy is very scary and I am literally risking my livelihood. Without my hands, I can’t sew or write. But I don’t ever want to look back on the last two chemos I didn’t do and wonder if they may have changed something that hasn’t happened yet. It falls under the heading of “Better Safe Than Sorry.” So we plow forward and finish what we started, as a good friend told me today.