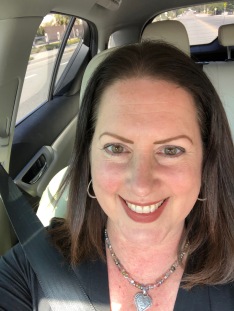 Three years ago today, I received the confirmation of a medical condition that would completely change my life.

It doesn’t matter how it’s written. It’s devastating in every form.

As an adult, there are very few moments of true fear that I’ve experienced. Car accidents, earthquakes, fires and lost children are those that quickly come to mind.

My experience is usually this: Adrenaline rushes through every part of my person when the awareness of something to fear hits. After some brief amount of time, I gather my wits and that rush blends into acceptance and step-thought. Step-thought for me is when I create the next steps needed to come out of this place of fear and into a place of action. This doesn’t remove the fear, but it helps me to focus beyond its paralyzing effects.

So, three years ago, I’m waiting for a phone call from my doctor with the results of my biopsy done two days before. It was a Friday afternoon, and I was at work. I’m walking through a hallway when my cell rings. Dr. D. is on the other line.

“The results from your biopsy are in and you have breast cancer,” my beloved Dr. D. said, slowly and with sadness in his voice.

My breath left me. I could no longer stand. I sank to my knees, my back sliding down the wall in my office building. All of the strength that I had used to repel my fear over the week and half between my mammogram and these results fled. What was left was fear. Intense, deep and pure fear.

“What do we do now?” I asked, barely able to get the air through my words. And as Dr. D. began sharing next steps and more details of the biopsy, I felt some of my strength return. I stood and walked to the office of a dear friend, who welcomed me in while I continued the conversation with my doctor.

Thus began a journey that I never expected to take, but one for which I will always be grateful.

Here’s the thing about having your “untimely” death become a very real possibility. It scares the ever-loving shit out of you, and it doesn’t stop. Not while you’re being assessed for the best course of action. Not while you are being treated. And certainly not when you’re pronounced done and maybe even cured. The fear is ongoing, continuous and while its impact ebbs and flows with the days and current situations, it never really leaves you.

So how does someone push through the fear? Acceptance. Prayer. Faith. Hope. Resolve. Humor. Exercise. Action. Distraction. Education. Fellowship. And, in my tutored and grateful opinion, the most important way to push through fear is by opening yourself to love. That’s where my gratitude comes in.

At my core I am an observer of life. I love watching and analyzing how we live. It’s one of the reasons why I was drawn to journalism, because I had the privilege of documenting other peoples’ life stories. When I was first diagnosed, I told my husband that I would have to write openly about my experiences. He said he expected nothing less from me. (That made me feel amazing!) I tried to approach much of my early days as a breast cancer patient as I did any other research, by watching and experiencing and then writing and photographing the journey. A tiny part of me was even a little disappointed when my doctors first told me that my cancer was caught so early that there would be little intervention needed to set me back on the path of life, because my experiences would have been limited to a simple surgery and radiation.

But, for those of you who know my full story, that innocence and yes, slight arrogance, about my situation quickly morphed into something more terrifying as I underwent a second lumpectomy with the recommendation of moderate chemotherapy. And then when I thought I was past the worst, I ended up with a double mastectomy, followed by some serious complications, and then aggressive chemotherapy for almost six months. My Stage 0-1 cancer was actually a Stage 2 condition, documented by 25 very small and deep tumors that hovered maniacally just above my chest wall. I lucked out by not having any of my lymph nodes affected, but the multi-focal definition of these many small tumors meant that my cancer could have traveled through my body by other highways. Hence the double mastectomy and aggressive chemo.

With every disappointing phone call and every unexpected, frightening turn of my situation, my old friend fear raised itself again and again, and commanded my obedience.

Franklin D. Roosevelt said, “Courage is not the absence of fear, but rather the assessment that something else is more important than fear.”

Each day for the last three years, I wake up and remind myself that I have more important things to do this day than to waste myself on fear. From the start, I promised myself that I would stand as tall as I could, even when I felt so weak and sick that I just wanted to collapse into a puddle of flesh. I pledged that I would dress nicely, do my makeup and wear a big smile every day even when I was bald, swollen and sad, because this would best reassure those around me who were invested in my survival. Even at my sickest, I vowed to pay forward all of the many kindnesses and acts of love I received, because I knew how much these gifts meant to me, how elevated I was to know I was loved and cherished. I swore that even when I felt my worst, I would try to lift someone else’s day, and respect my fellow humans for their journeys, because no matter how bad I felt or how dire my situation, there are so many others who are going through much worse. I chose to share openly what my experiences were because so many of us go through versions of this or watch loved ones endure cancer treatments, but they don’t know what to expect, and knowledge is power, especially over fear.

Somewhere in all of this, in the face of constant fear, I found my courage. And I believe that I retained my kindness. Which is why that sweet line from the movie, Cinderella, became one of my two mantras that year, “Have courage and be kind.”

The other was “strength,” which is a word that has always inspired me.

My formula for surviving and thriving while navigating a cancer diagnosis is this: courage, kindness and strength. And add to that good nutrition, lots of sleep, prayer, as much exercise as can be tolerated and always seek joy.

On Thursday, I will undergo my tenth surgery in my cancer journey. The first four surgeries got rid of my cancer. The next five–and this one–put me back together. In that number, three of these surgeries were unplanned, emergency operations. This should be my last surgery. But if it isn’t, so be it. I am determined to regain as much of my health as possible, and to regain as much of my “normal” as is practical.

Me and Samantha at her Senior Awards night.

There is nothing cliché about my saying that I could not have gotten through one day of this without the constant support and love of those around me. I can’t even list how many people reached out to me, sent me gifts, brought food, cared for my kid and husband, offered smiles, hope and encouragement, and so much more. I am horrible with writing thank you cards, but in the early days of my treatment I started to list the many people I wanted to thank at some point for their time and concern. I had to stop when the list exceeded 75 within a month, because I was too overwhelmed to know where to start, and then I was too weak to consider tackling the list. I had to let it go, but I hope that I adequately thanked everyone in other ways.

Cancer is not a solo journey. Every patient walks it with those who love them. My family, immediate, extended and adopted, never wavered in their care. I never felt so loved before, and it came at the time when I needed it most.

Me and Stephen at a concert.

There are too many who have lost their breast cancer fight in this life, many who I love. Hannah. Madeleine. My grandmother. Melissa. Shannon. But I can also say that there are many, many more men and women who have survived their disease and that’s how hope is born. They were there for me. They advised me and guided me through this. And I want to be there for others, because that’s how we get through this, together.

Tell us like it is, but be polite! Cancel reply